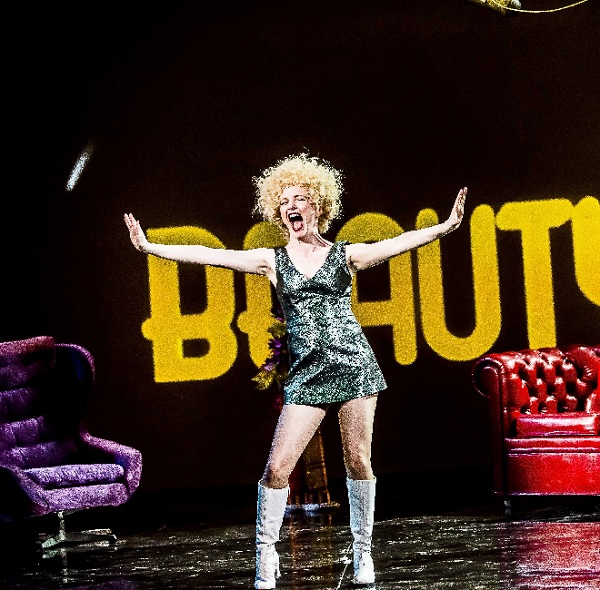 On May 19th, 2015, the National Opera in Warsaw  staged the last performance of Powder Her Face, the house’s latest premiere, co-created with the La Monnaie Theatre in Brussels.

This chamber opera was composed by Thomas Adès; what continues to amaze me is that at the age of barely 24 Adès managed to create a work that is at once modern and harmonious, refined, sensual, and most of all ingeniously devised, with the music  resounding with sarcasm, irony, pain, disappointment and internal conflict.

Adès weaved Schubert’s “Death and the Maiden”, as well as Gardel’s and Piazzolla’s tangoes into the fabric of his composition, but the way he did it stresses his original music as the foundation of the entire work, a medium through which Adès tells the story of the characters, and the borrowings feel as though they were being played on the radio, or performed by a separate orchestra at some ball or other social occasion. The sensation created is that of observing the life and pursuits of the characters, enriching the overall effect of the work.

The music perfectly expressed the emotions of the characters – once you focused on what was going on stage, you forgot altogether that music constituted a distinct element of the spectacle; everything, at least to me, felt closely intertwined.

Undoubtedly, the credit should go to the musical director of the spectacle, the Buenos-Aires originating maestro Alejo Pérez, held in high esteem by artists of various proveniences, who conducted the premiere and four subsequent performances. The orchestra knew their way around the score immaculately, an achievement for which praise is due also to maestro Bassem Akiki who conducted the Tuesday, May 19th, staging.

The two artists share not only the unique southern temperament which heated up the English restraint helping produce a vibrant and captivating spectacle; both Pérez and Akiki at one point in their respective careers have conducted Peter Eötvös’s Angels in America.

The prototype for the main protagonist of Powder Her Face was Margaret, Duchess of Argyll, a beautiful celebrity notorious for her scandalous conduct during the divorce case her aristocratic husband filed against her. The duchess remains the core character in the opera.

How was she portrayed by the director, Mariusz Treliński?

The opera actually started before the orchestra and the conductor took their places in the pit which was due to Boris Kudlička’s set design – the audience was sitting right at the stage of the Warsaw theatre. Thus, it was us, members of the public, who became the first protagonists in the spectacle, with our conversations, comments, smiles, glances, likes and dislikes, airs and social graces, or lack thereof. The key to the director’s idea was the incorporation of a mirror into the set, a strategy which allowed the audience to ponder on their own reflection.

The scenography encircled the audience what further strengthened the sensation of our active participation in the spectacle – on the one hand, we were the actors, too; on the other, we passively watched the drama develop right before our eyes, without any one of us daring to intervene, protest, help, interrupt when the heroine became the target of her maid’s derision, when she fell prey to the cynicism of her acquaintances, of journalists – none of us had the courage to speak out for her, not even when she stepped amongst us and directly asked for help – “get me a car” – or when, all on her own, she eventually took her life, and right  next to her a pair of kids was dancing, as if saying “we don’t give a damn about your death because in OUR life everything is just starting anew, there’s a lot fun, smiling and good time”. No one reacted.

The focal point of the set was a bathtub – not a bed, which is perhaps the most immediate association with a hotel room, but a bathtub which in the opera carries multiple meanings, i.e. that of an essential part of Margaret’s ‘toolkit’ to prepare her body for a series of love conquests, and of a cleansing device with which she’d purge her body and her mind of the procession of love acts, in an attempt to wash off the awareness of – and the resultant sense of humiliation – that there is a price to pay for each and every love adventure…

The water curtain might have symbolized the cooling of all the emotions bottled up in the heroine, the excess emotions, such as those she manifests in the culminating scene the setting of which changes from a hotel room to a petrol station. The rationale followed by the director must have been that in our modern times a petrol station has become a sort of a ‘last resort’ when all else fails and we have to get something we’ve just run out of, something the lack of which we’d most likely feel very acutely because that thing brings us pleasure, joy, some form of gratification, whether justified or not – alcohol, cigarettes, sweets, or, as in Margaret’s case, love. Love that she’s run out of so she went to get it.

Sensuality, loneliness, helplessness, despair, emptiness, cold irony and hypocrisy of people around us (those who tell on us are far from blameless themselves), lack of understanding for a maltreated wife, standing by the side of the oppressor, judging the victim, voyeurism and thrill from watching somebody’s downfall – it was all there, right there on the stage, around us. 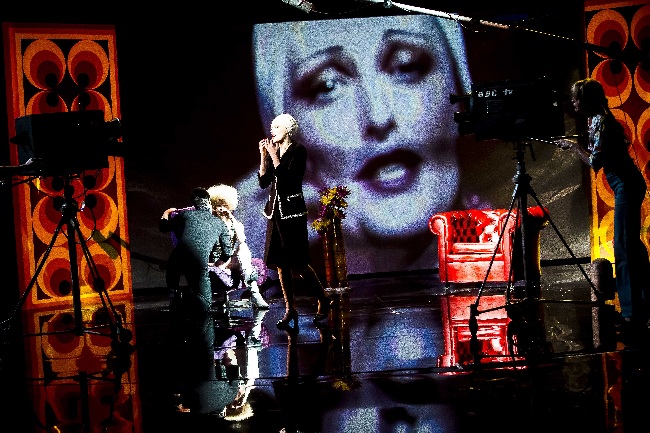 The dramaturgy by Krystian Lada further added to the spectacle’s powerful overall effect; choreography smoothly worked alongside the music (Tomasz Wygoda), the costumes by Marek Adamski were designed with ingenuity, especially in the scene of the last interview – the heroine’s headscarf immediately got me thinking of scarves worn by sick people, a thought further developed into an association with a social pariah, a parvenu, an outcast. Praise, too, to Bartek Macias for his visualisations – apt and acute, they brilliantly served their function.

Last, but not least, arci-bravi to all the soloists – not only for their world-class singing but also for their fantastic acting: Allison Cook took the part of the Duchess, Kerstin Avemo – the maid and journalist, Leonardo Capalbo – the electrician, and Peter Coleman-Wright the hotel manager and judge.

Some concluding thoughts: “There’s a magical quality to money: when you have it, you are never alone” (Paulo Coelho)

Two succinct summaries of the spectacle, for which I am saying a great thank you to all involved in its staging.