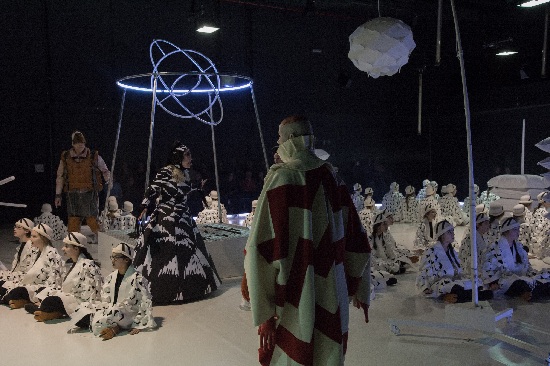 The album Medulla, which came to constitute the basis for the opera of the same name, was released in 2004, as Bjork’s reaction to the terrorist attacks of 2001, envisaged by the artist as a world-wide protest against the fast-spreading epidemics of racism and an expression of her stance towards inequality, maltreatment, and human rights abuse effected by one human being on another on the grounds of gender, ethnic and national background, religion or sexual orientation.

In order for such a critical voice to be heard something indeed extraordinary had to be prepared, something altogether different and bound to attract the listeners‘ attraction not only to the music, but to the social issues the artist had the courage to address. In order for the album to yield extraordinary results, it just could not fall on deaf ears.

To that end, Bjork decided against using virtually any musical instruments, placing all emphasis on the human voice exclusively, with the designs set on achieving a nearly primal sound which would bring her – and her listeners, as well – closer to the core of any living creature. That explains also the artist’s choice of title which in turn legitimises the rejection of all things artificial in favour of a selection of human voices; hers and those of the contributing musicians; together their vocalises merged into an enchanting whole. Wo/man and voice solely. As it has turned out, the strategy has revealed the world’s greatest and truest values, showing them for what they really are  – none other but human beings.

The Icelander has already made her mark as a very peculiar and somewhat ’niche‘ artist, and the 2004 album – introvert, aimed at seasoned recipients – was specifically thought up to move the listeners‘ imagination and re-awaken their numbed sensitivity.

Such was the substance at hand which confronted the creative team responsible for the production of the Brussels premiere, with daring dramaturgy by Krystian Lada.

Sjaron Minailo –  Israeli director specialising in experimental opera stagings bet his all on music and emotions it draws from listeners. Already at the outset of the spectacle Minailo’s vision caught me by surprise – the entire stage was encircled with high black net isolating the audience from the artists. Hence my first objection, or internal rebellion – why impose such limitations on my freedom to experience the stage performance as I would like to? Why erect a wall between the viewers and the artists which makes all that is going on stage appear dark, murky, outside the audience’s scope of comprehension, even fear-provoking? At that time, though, it dawned on me that the device actually serves an important purpose, excelling at laying bare the limitations and barriers all of us encounter every single day. Quite instinctively, I felt the emergence of an internal need to overcome that barrier, to conquer that obstacle which so troubled me.

Henrik Vibskov – Danish fashion designer, responsible for the outfits in the production. The costumes proved very much elaborate and intriguing – the Afro-American soprano Roberta Alexander wore a black-on-black gown, whereas the Dutch mezzo Mireille Capelle sported a black dress with some very tiny white elements, which made the two women appear so dark that at times it felt as though they vanished completely, especially since the audience was looking at the stage through a thick black net.

Perhaps a hint at the issue of women’s non-existence or their ‚un-wholesome‘ presence in social life in many cultures and communities.

The leading male artists  – the tenor Kevin Walton and bass Frode Olsen –  were both wearing outfits uncannily resemblant of the military style.

At this point it might be worthwhile to stress that throughout the entire performance I couldn’t shake off the impression that the ladies maintained consistently sad facial expressions, which could perhaps be read as their internal dissenting scream against the unfair treatment of women in contemporary world. The men, in turn, kept quite frightful faces, as if they had been arbitrarily inscribed with the role of the warrior, or the more comely ‚macho‘ type.

A counterbalance to these figures was offered in the figure of Jackie Janssens‘ priestess, dressed in a white and red costume reminiscent of a bishop’s ornate. Janssens struck a particularly charismatic presence also thanks to her quite unforgettable and extraordinary ‚husky‘ voice, verging on the hoarse. A fantastic experience it was, to listen to her.

Praise should also definitely go to the production’s young singers‘ choir, marvellously trained and prepared by Denis Menier and Benoit Giaux, to an enchanting scenery and set design created by Anat Spiegel which made the opera feel as if it had become the very embodiment of Bjork’s original album. The children were wearing outfits modelled on a typical Icelandic iceberg valley which for me turned out to be a real revelation –  the whiteness of their dresses seemed to symbolise the innocence children are born with, only to be later on moulded and shaped by us, adults, to our own liking and in accordance with our own vision of the world, our values, stereotypes, biases and prejudices. The gestures enacted by the children in their stage play of rituals demonstrated their inclination towards friendship, unity, and peace, and one could not help the sensation that they were actually trying to convey these to the adults, trying to realign them to the idea of a harmonious and peaceful co-existence in a friendly world.

The sole instruments used during the performance were ritualistic drums and gongs played by Simon Weetjens along to some snatches of electronic music prepared by Henry Vega, which added acuteness to the harmonious sound of the choir and the soloists, and which had the power to transport the beguiled listeners to an altogether different dimension.

The pride of place on the stage was occupied by what I came to interpret as the symbol of the galaxy, the core of the entire set design, the ultimate reference point, and the children, seated comfortably in circles around it, could well symbolise the galaxy’s particular planets.

Musical direction of the opera was effected by Bassem Akiki, Polish-Lebanese conductor of the young generation. It was indeed a mighty feat because Akiki had to assume his musical supervision of the entire performance not from the conductor’s usual place in the orchestra pit but from a mezzanine.

Bjork’s Medulla from La Monnaie is by all means an opera, or rather – an emotion-ridden opera ritual –  which I genuinely hope will reach also those listeners for whom opera is not their first musical choice and who claim to be total laics when it comes to this form of art. Medulla makes up for an all-out performance one is bound to analyse well after the final curtain call. The sound of the children’s choir still rings in my head. Bravi, the team of La Monnaie!