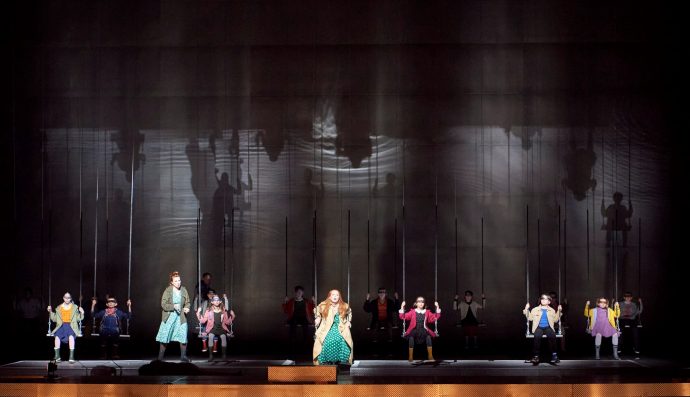 Traditionally, Wagner’s Parsifal is given during Easter, as it is playing during Good Friday, and Wagner dedicated this piece as „Weihefestspiel“ especially for this purpose. After director Bodgan Roscic already had the hybris to put Parsifal to Christmas time this season instead and ruined it with a production that had been strongly booed by the Viennese audience, he gave CALIXTO BIEITO the opportunity to create a new Tristan for Wiener Staatsoper. An elementary mistake as we unfortunately had to experience on Easter Monday:

The 1st act started with showing meaningless swings hanging from the top. Except some water, only children were sitting on the swings as well as the singers. 2nd act not much better: Tristan and Isolde were catched in floating boxes. As they cannot find to each other they are ruining the furniture. This appeared already as ridiculous and affected, also Mrs. Serafin and Mr. Schager seemed rather awkward than consumed by love. The 3rd act brought then indeed naked people to the stage, without any function, just moving and creeping around on a dump. This haven’t been scandalous anymore since the late 1960s.

Latestly on this point the production pointed out to be not only boring and uninspired. It even has to be considered as ridiculous and cheap. But as if this was not enough, Mr. Bieito even was leaving the faithfulness of the original piece: Besides trying to set childish arts-fartsy pseudo-provocation, he lets Tristan hurt himself, not Melot. One has really got to wonder, which kind of arrogance is with Mr. Bieito that he thinks of himself in a way that allows him to ruin Richard Wagner’s masterpiece in such a twopenny-halfpenny way. It is indeed no surprise that this production has already been booed at the general rehearsal, as well as the premiere and that Mr. Roscic obviously sent some claqueures in on this night – nevertheless the audience was not amused. What had been brought to the stage of Vienna Opera here was neither a smart provocation nor a sophisticated result of director’s theater. It was simply garbage. And as such, it was beneath the dignity of this cultural institution, ruining its great reputation and finally spitting in the face of the audience that was forced to pay money for a huge amount of crap. We strongly hope that this production will be abandoned as soon as possible.

Unfortunately, we also cannot report better about the singing performance. ANDREAS SCHAGER made an even narcissistic impression as Tristan but lost his voice in the 2nd and the 3rd act so he was simply painful to listen. MARTINA SERAFIN was at least solid, nevertheless her voice tended too much into screaming, the role of Isolde was obviously too demanding for her. RENE PAPE was as always great to listen to, but attended too less as Marke to save the evening, same to CLEMENS UNTERREINER as very authentic Melot. Also a praise for EKATERINA GUBANOVA who gave the best performance this night as Brangäne.

Conductor PHILIPPE JORDAN also failed again. The prelude was conducted extremely slow, so he missed to bring in the complete impact of the Tristan Chord. Starting with the 1st act, Jordan as always was much too loud again. It really seems that he is not able to focus on small details and low volume. Funnily, this is „okayish“ with Wagner’s music (even not good), nevertheless it emphasizes the mediocre performance of Mr. Schager and Mrs. Serafin as they could not be heard properly quite often. As already said, Mr. Jordan should better conduct a marching band.

Let’s sum it up quite clearly: This evening was by far the most terrible and dilettante performance we have ever seen on the stage of Vienna State Opera. Actually we feel betrayed and want our money back, as this was much below the standards that can be expected as a minimum for a house with this history. It marks the provisional low point of director BOGDAN ROSCIC‘s consequent aim to bring in modernist litter that has nothing to do with being contemporary or even provocative. Regrettably, we expect that there is much more to come in the future and state it very direct: Enough is enough.