Indeed KS RENÉ PAPE is one of the most profiled Opera Singers, even a rubber duck is designed after him (the „Pape Duck“) and he is highly celebrated for his humor, his intellect, his voice and his presence on stage. So we were looking very much forward this solo recital. 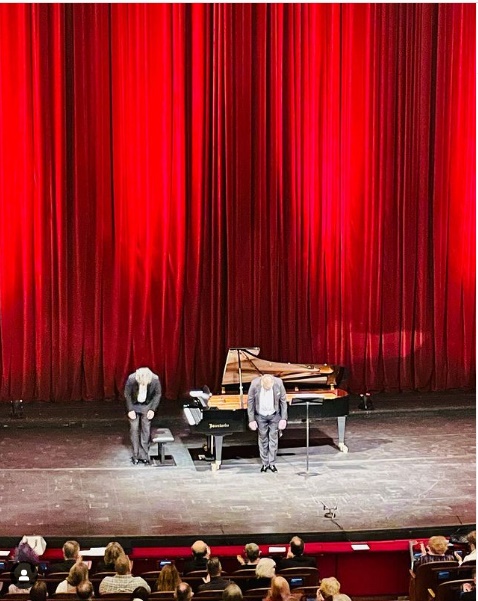 Alas, Mr. Pape apologised in advance as he announced the death of his mother the day before, to whom he dedicated this concert. That he was not able to sing Rachmaninow’s Vocalise is more than understandable, it has to be seen as absolutely admirable that Mr. Pape did not cancel the recital and performed on stage instead. We want to express our deepest respect, sincere sympathy and condolences to Mr. Pape at this point!

The evening had therefore a special atmosphere as one can imagine: Mr. Pape really began to start over from Dvořák’s „Hear, oh hear my prayer“ on and brought an amazing performance to the stage of Vienna State Opera. Perfectly accompanied by CAMILLO RADICKE at the Piano, Mr. Pape didn’t only demonstrate the bright varieties of his voice. He also coruscated being able to underline tiny details that show off totally new aspects of a song. As if this would not be sufficient to prove the class of Mr. Pape, he even topped the performance with additional three encores he treated the intensely cheering audience with.

Franz Schubert’s „An die Musik“, D547, followed by again huge applause and many bravi. Richard Strauss‘ „Zueignung“ from „Acht Lieder“, Op. 10 which even increased the bravi. And finally Jean Sibelius‘ „Be still, my Soul“ from Finlandia, op. 26. We rarely experienced such emotional intensity and were happy to join the standing ovations of the audience!

This was not only the evening of an exceptional and outstanding artist. It was also an evening of warmth, social cohesion and masterful art.

Mr. Pape, we bow ourselves before you!“