According to both authors, this should be a „play with music“, not an „Opera with Dialogue“.

My connection to Bertolt Brecht & Kurt Weill began quite early in my adolescence. Both are greatly admired in South America (perhaps even more than in Europe) and my first contacts with their work were not only from the audience but also at Theatre School. Nevertheless „the“ special „landmark“ in my life that brought me truly to admire this most aggressive (and daring) work, was an old LP that my parents used to play at home: Die Dreigroschenoper with Kurt Preger (Macheath), brilliant Liane Augustin (Polly), Hedy Fassler (as the most debauched „Spelunkenjenny“/ Honky-Tonk Jenny, I have ever heard), Anny Felbermayer (a very screechy Lucy) and Rosette Anday and Alfred Jerger (Mrs & Mr Peachum). These names are nowadays not very known anymore but they were during the difficult after-war years – I wonder how it must have felt to have been in a work that „foresaw“ the „Beefsteak-Tartar“ as mentioned during the „Kanonensong“ (Cannon Song). And perhaps you may have guessed: those were very well-known names in Vienna and, guess what, this is a recording from the same Volksoper as yesterday, but from 1955. Nearly 70 years ago. This precious recording is perhaps the best one ever made (Although I must admit that Nina Hagen’s „Mrs Peachum“ some years ago was incredibly strong)… 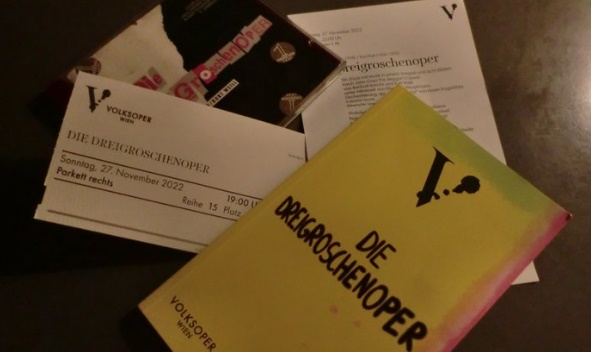