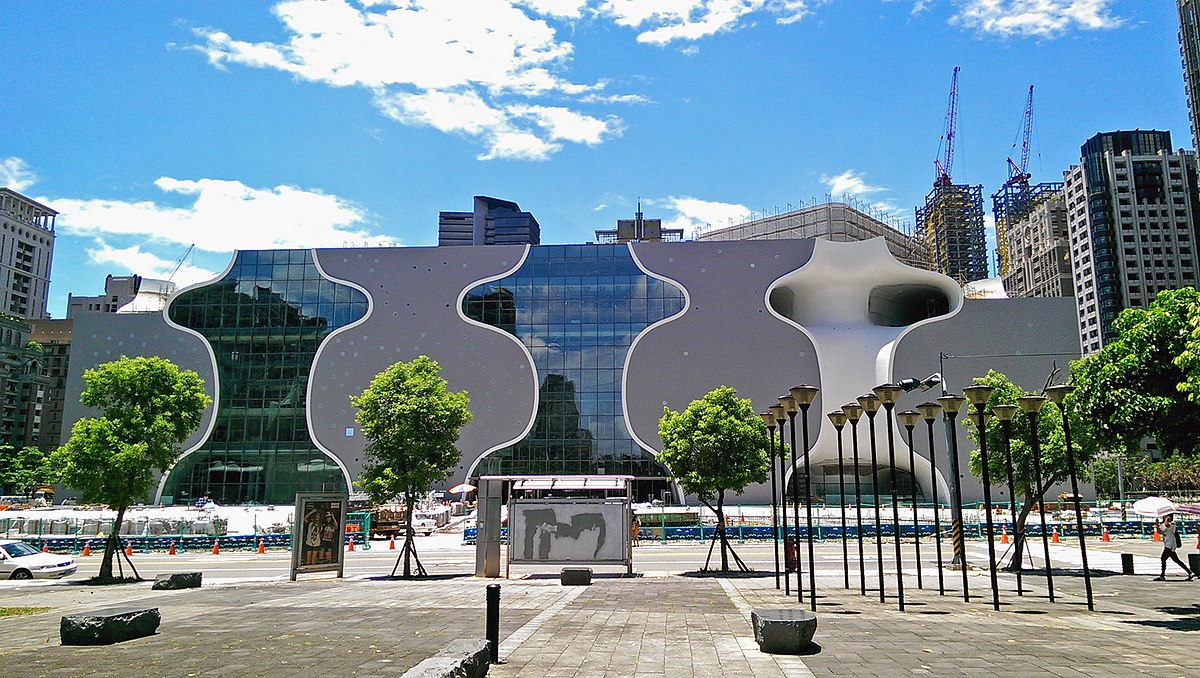 Taichung is Taiwan’s second largest city (2.8 million), having overtaken Kaohsiungjust over a year ago. Due to its location on the western shorelineit is largely protected from typhoons, it enjoys better weather than the capital Taipei, and it retains a good measure of local character through the absence of the ubiquitous American chain hotels and eateries that blight so many Asian cities.Taichung also enjoys a reputation as an intellectual, artistic, and cultural  center, with numerous fine museums including the National Taiwan Museum of Fine Arts, which houses the world’s largest collection of Taiwanese art. Taiwan’s Wagner Society, boasting about one hundred members, began in Taichung.

Taiwan’s first national theater opened more than thirty years ago in Taipei (actually, a pair of halls – one for concerts, one for stage works – nearly identical from the outside, situated in a huge plaza beside the Chiang Kai-shek Memorial), but as if to make up for lost time since then, within the past two yearstwo more national performing arts centers, each with multiple theaters, have opened – one in Taichung and another in Kaohsiung this past October. More or less evenly spaced from north to south, these three performing arts venues now provide nearly all  ofTaiwan’s population with easy access to a wide variety of artistic endeavors or both local and foreign origin.

The National Taichung Theater (NTT) is a striking piece of architecture designed by the Japanese Toyo Ito. Externally it occupies more or less the space of a huge box, but is decorated with sweeping, curved designs thatimmediately attract the eye. Like its counterpart in Sydney, the building quickly became a tourist attraction in itself. Entrance to the foyer is at ground level – no steps to mount – welcoming the curious and drawing in large numbers of locals and visitors for a look around. Inside there are no vertical walls; instead, the NTT consists of 58 curved walls molded into 29 “caves,” resulting in what architects call a catenoid.

Taichung has also put itself on the musical map as the first city in Taiwan to mount a fully staged Ring cycle. The NTT opened its doors in October of 2016 with Das Rheingold in a revival of the production from Valencia, with its innovative staging by La Fura dels Baus, and has been offering further Ring installments in successive Octobers. In 2018, Siegfried received three performances on October 10, 12 and 14, of which I attended the first two. The Valencia production has been in circulation since it opened in 2006/2007, with revivals in Florence, Seville, Houston, and two more in Valencia. For its Asian premiere, revival director Esteban Muñoz assembled a prestigious cast and directed the proceedings.

The production seen in Taichung is essentially that of the 2008 video filmed in Valencia’s Palau de les Arts Reina Sofia. Among the changes, Siegfried is now a more boyish, impetuous fellow, and has much more to do while fighting Fafner (in the film he merely stands stock still until delivering the fatal blow); there is more for the mimes to do in Act I; the Wood Bird makes more frequent appearances; and Erda moves up and down on her crane to a greater extent than before. But the whole concept – all those extra bodies writhing and twisting (Taichung’s Wugi Troupe), the near-constant video projections, the six huge floor-to ceiling panels moved about by stagehands, strobe lights – adds up to a show in itself. While there are inspired moments (the camera zooming in from outer space into a hole in the earth that takes us down to Mime’s abode, or the spectacular aerial traversal of mountain scenery for the Prelude to Act III), there is far too much that is redundant, superfluous, anddownright distracting. When floor sweepers cross the stage while Siegfried and Mime are conversing, while Siegfried works out on a Stairmaster as Mime describes the meaning of fear, while 35 or 40 mimes are lined up at the back of the stage tapping hammers in time to Siegfried’s forging of the sword, Wagner’s characters and music almost become a sideshow.

Vincent Wolfsteiner is 52 but looks and acts exactly what everyone always hopes for in a Siegfried – youthful, impetuous, impulsive, athletic, frisky as a teenager. And he has the vocal strength and endurance to match. Wolfsteiner gave 100% right from the start and never let up; five hours later he seemed as if he could have done it all over again. I’m told he sang in full voice at all the rehearsals as well, even the dress. If there is one thing missing in his interpretation, it is a lack of variety in the voice; appealing as it is, one yearns for a bit more variety.

Equally impressive was the Mime of Rodell Rosel. Though Filipino, his German was the best of any in the cast. Far from the overwrought caricature Mime can easily become, Rosel turned him into a three-dimensional character of compelling interest and fascination.

JukkaRasilainen’s Wanderer too was an impressive achievement. The voice is not as strong as some Wanderers, but his delivery was every bit that of a commanding god. His height, a floor-length cloak, and a three-meter spear (but no eyepatch) added visual conviction to his pronouncements.

Susan Bullock has never been one of my favorite Brünnhildes,and she again disappointed in Taichung. Her opening moments were tentative and subdued, although appropriately so if one allowed for someone just waking from a long sleep (“Heildir, Sonne” was more cloudy than sunny). She was at her best in the softer, gentler passages, but when power and drama were required, the voice tended to shred, and never achieved the gleaming radiance of the great Brunnhildes. Beside Wolfsteiner’spowerhouse Siegfried,sheoften sounded strained, even raspy at times.

Fafner was ridiculously over-amplified in his cave (one couldn’t even tell what language he was singing). After Siegfried wounded the huge mechanical contraption on stage, Andrea Silvestrelli was borne in on one of those silly cranes for which the production is (in)famous, to engage in a heartfelt dialogue with his slayer; one almost felt sorry to see him die. Nathan Berg was an adequate Alberich (he looked evil but didn’t really sound it), Meng-chun Lin a tremulous Wood Bird, and Juliana Jia-jen Chang an Erda with nowhere near the right voice for the role.

Asia’s only orchestra so far to play for two different Ring productions, the world-class Taiwan Philharmonic, was in the pit. This is the country’s flagship orchestra whose European tour last year  [2017, if this review goes in the December issue] included a stop in Vienna. By coincidence, the Philharmonic’s first encounter with the Ring (a semi-staged cycle in Taipei) occurred in the same year (2006) as the Valencia premiere. Aside from scattered intonation problems in the woodwinds and brass, the orchestra did itself proud, fearlessly rising to the score’s technical challenges and demonstrating once again the richly burnished sound that sets it apart from most other Asian orchestras.The Act III Prelude was awesome in its devastating power.The Philharmonic’s music director since 2010, Shao-Chia Lü, brought clarity of detail, continuous  momentum,and grand sweep to the score, resulting in a masterful interpretation derived from extensive experience conducting in German houses.

A word about the audience: Surely 90% had never seen the opera before. The majority were twenty-somethings, there was nary a westerner in sight, dress was extremely casual, andthe theater was as quiet as one experiences at Bayreuth, the applause sincere and rapturous. Five hundred eager souls showed up for each of the well-presented pre-concert talks. Five screens around the stage provided translations in Mandarin, two of them with English as well (Jonathan Dean’s excellent, idiomatictranslation used in Seattle).Wagner definitely has a future in Taiwan. Götterdämmerung is scheduled for October 9, 11, and 13, 2019.