The operatic breath of freshness has appeared on the small-sized stage of the Silesian Opera, but great in its artistic expression play „Traviata“ by Giuseppe Verdi in the latest production by Michał Znaniecki.

A director, who can run characters in a way where we experience a constant impression of a conversation, talk, emotional dialogues among heroes, which in the opera is not easy to achieve and deserves recognition. They talk, express their fears, feelings, dilemmas, problems, despair and we, along with them, are drawn into the life on stage while listening to the singing and the music from the orchestra, which also became part of the stage, part of the characters‘ life.

What is most important was perfectly covered by the director, to be extracted with the incredible power of the message – life and its most precious values. Love, devotion, selflessness. Precious values of these days.

Traviata, in this role –  Joanna Woś, in the director’s assumption ill with cancer – a deadly disease of our time, brings life, revival and reflection to all those who were left after her death. For the audience, also this is the most valuable.

Everything that was built in colorful, exaggerated scenes, sometimes arousing irritation and automatic opposition in us, that this is what we have every day, around us in stupefying excess, that we want to see another world in the opera, that we do not hear what is most crucial: the beauty of music; all this has been moved away in an intimate scene of Violetta with Alfred’s father releasing the right emotions in us. Since that moment life has begun. Without glitz, falsehood, no empty play, no people for whom music is just a backdrop to having fun and achieving their own goals, with purifying truth beyond belief.

Cancer, but the society cancer, fall, but the fall of values and good taste, stray, but the stray of people of modern times. This play is about dying, but dying of the quality of man’s being classy. About dying, and at the same time awakening in a masterfully programmed final scene, in which we have to thank the choir of the Silesian Opera, in the premiere performance you were extremely convincing, valuing in us what should be appreciated.

An unbelievable forcefulness of this director’s realization is the emphasis of the power of love that unites the heroes underlined by the moment when the walls of the Silesian Opera were shaken with the strength of music from the orchestra, the power of Joanna Woś’s voice and the energy of emotions created between the characters at the moment of love.

Andrzej Lampert – Alfredo, seemingly a young, inconspicuous photographer, but playing a very deep role in this spectacle, is the only one to have extracted a human being out of hundreds of photographs that he had taken. As the only one, he sees a man with his dreams, desires, fears, not an uncharacteristic pose, but all that is beyond it.

And he strives to realize his own dreams, feelings, desires against everybody and everything that is fashionable and trendy and above all what is unseemly and what is not.

And the father – Giorgio Germont, played by Stanislav Kuflyuk – subdued, and at the same time by this liberating in us, listeners and viewers, opposition, a will to shout „Stop“, think about it, but with attention we witnessed dilemmas and dramatic choices of the main character. Integrity. 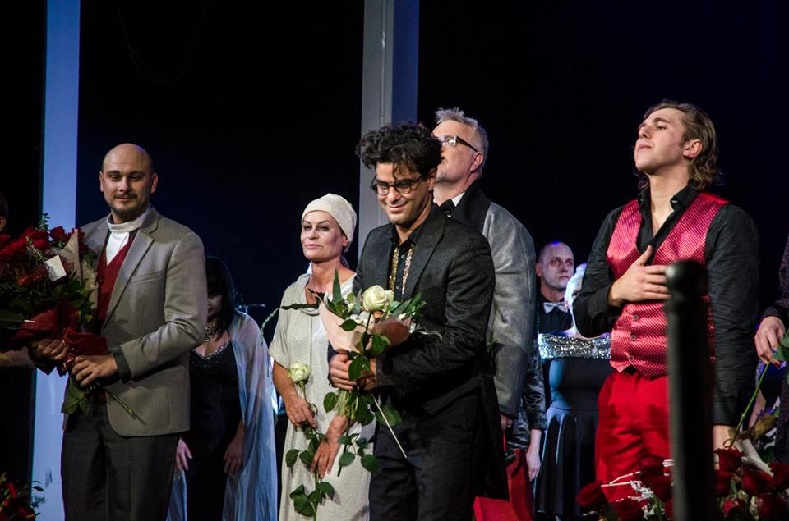 The orchestra also played in the performance. And how? It’s a must to see and above all to hear the Silesian Opera orchestra playing under the baton of Bassem Akiki, the music manager whose music is a coherent element of the artistic message, very important in this spectacle.