When I entered the premises of the Silesian Opera in Bytom, I immediately felt that it is a place with soul. The traditional chamber scene surrounded by a small, stylish auditorium, awakened curiosity of what was about to happen on it this evening.

Everything seemed so close – small space created a feeling of intimacy and lack of barriers between the spectators, the orchestra in the pit and the artists on the scene.

Thanks to all that we became a part of the Bizet community when the curtain went up and the overture, played by the Bytom orchestra under the baton of Bassem Akiki, was over. 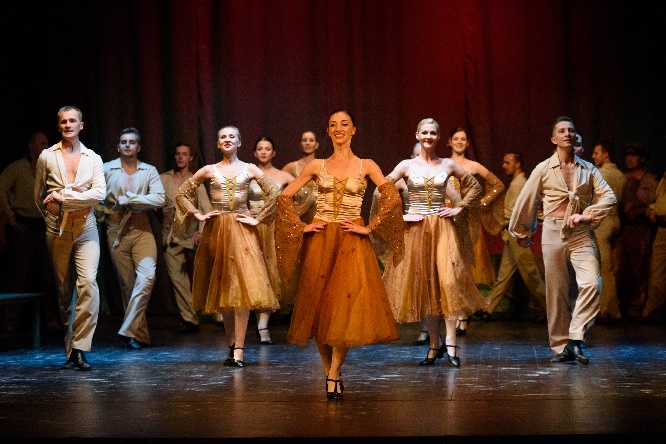 From the very first moments of the spectacle we got entangled in the emotions of the protagonists, interpersonal relations, since the emotions played the lead role and constituted the first and the most important plan, which was possible to achieve thanks to a discreet scenography that performed all the required functions, and carefully crafted minimalism in stage movement.

We could all share a spirit of love present in the songs and joy of dance felt by the dancers. That created a background for Carmen, interpreted by Anna Borucka – she stole the hearts not only of her admirers, but also of the audience, and rightly so. Nonetheless, since the Friday evening was so special, it was Maciej Komandera – scenic Don Jose, laced with various emotions, and his mother, awaiting him in the house by the forest, solely referred to in the protagonists’ stories, who were the most important characters of the day. Ewa Majcherczyk (Micaela), who singed her story, fell in a mood adequate for the Mother’s Day, celebrated in Poland on the 26th of May, since she depicted a beautiful image of a loving woman awaiting her son – my compliments

Zbigniew Wunsch (Torreador) created a confident man, accustomed to success, a typical trophy hunter, which was perfectly illustrated by the director, Wiesław Ochman, in the scene of seemingly triumphant entry to the stage of the victorious couple; however, the feeling of victory is sometimes very illusory, which we could all very soon see for ourselves.

Musical decoration for this evening was provided by Bassem Akiki, not only with his impeccable appearance, but in the first place with meticulous crafting of details and musical zest, thanks to which the music that evening was overflowing with love, unrest, sentiment, joy, and the orchestra under his baton sounded exceptionally harmonious and in accord.